Like almost all events this year (2020), Acquia Engage also went virtual and that meant that I could finally attend one. I have been to many Drupal conferences (DrupalCons, DrupalCamps, meetups) and Acquia has had a visible presence at most of these. An Acquia specific conference was, predictably, different and, again predictably, significantly about Drupal.

So, in this post, I will talk about four things, in no particular order, that I took away from Acquia Engage this year as a Drupal developer, architect, and contributor. Acquia Engage covered many marketing specific technologies and products as well, and I will mention some of them, but this post is about Drupal.

Acquia now provides a Cloud IDE—not just an editor—that enables a development experience in the cloud. This means that you can work on your site from anywhere with relatively lower-powered devices.

Developing for Drupal easily gets heavy in terms of resources you need on your machine. There is, of course, the processing speed, memory capacity, and other aspects of performance; at the same time, the software stack is not trivial to set up either. At Axelerant, we have made great strides in simplifying the setup by providing tools ranging from dotfiles to templates and generators to speed this up.

The Cloud IDE takes away all these needs with a fully functional development environment ready within moments. This environment includes a powerful editor, terminal, and a site environment configured with xdebug for real-time debugging capabilities. The system includes common tools such as composer, NodeJS, npm, gulp, and even Acquia CLI for interacting with Acquia Cloud. Further, this environment is entirely the developer's playground where they can install any tools they want.

Acquia has long been investing in a faster time to market to build Drupal sites. Earlier, solutions such as Acquia Site Factory would allow you to spin up new sites with practically no lead time. In September 2019, Acquia announced the acquisition of Cohesion to build better digital experiences by empowering marketers to work with content directly that would earlier need a developer and/or designer involvement (BTW, we were early adopters of Cohesion and the first agency to be Cohesion certified). Today, we see Cohesion rebranded to Site Studio (low code site builder) with newer features but with the same intent of making the websites easy to use and enhance.

Cohesion, now Site Studio, supports a drag-and-drop approach of building content that lets marketers define layout and styles at the same time while ensuring the brand guidelines are met. This approach makes it easier for editors to get complete control over the content, layout, and styles while making sure that the page doesn’t inadvertently break. Furthermore, the component-driven approach makes reuse across content types, and even sites, possible.

The newer release of Site Studio would now have a WYSIWYG functionality that will make it easier to visualize the content. I’m hoping they also resolve issues with configuration management when used with Cohesion in the upcoming releases. With that, Site Studio could be seamlessly integrated into current Drupal development workflows.

Containerized Infrastructure with Acquia Cloud Next

This is probably my favourite item on the list today. Acquia started their business in the cloud with hosting for Drupal pioneering the industry at the time. However, their infrastructure model is due for change considering the contemporary scaling practices and tooling. I was very happy to hear that they are finally moving to a modern container-based infrastructure run on top of Kubernetes (there was a mention of Kubernetes-native). The infrastructure was in private beta but you can now request to move to their k8s based setup before it hits general availability next year. 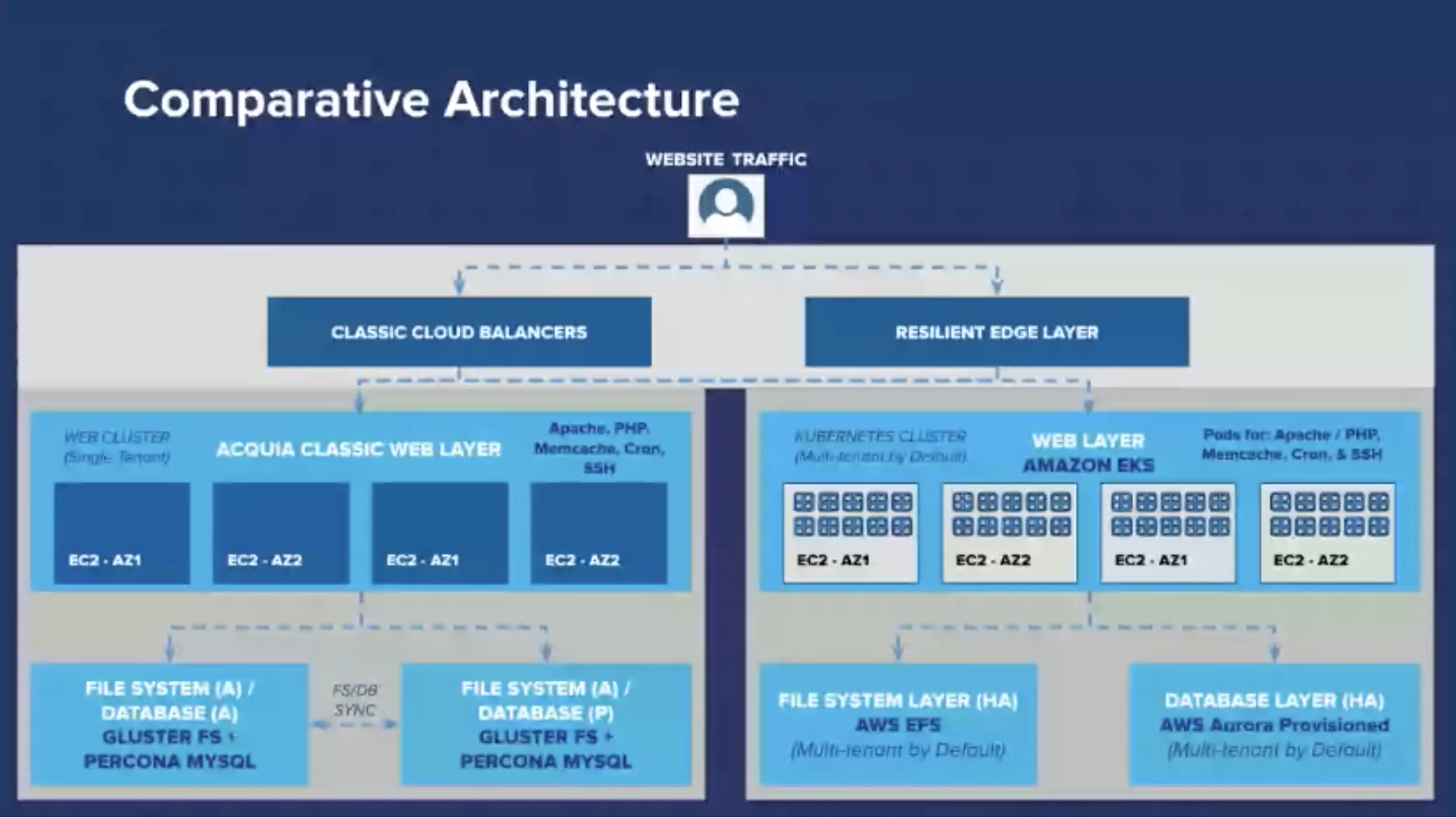 Migrations can be painful. At Axelerant, we have been migrating to Drupal from a wide range of sources for years, and we can tell you that it’s not for the faint of heart. Some simple migrations have become very easy thanks to the migrate framework in core, and it’s also possible to do a “upgrade” from Drupal 7 (most of it) with modules available in the core. But migration is not a technical challenge; it is a challenge of figuring out the mapping of the data depending on the source and the destination schema. Moreover, it is also the challenge of dealing with inconsistencies or “surprises” in the source data format.

This is where Acquia Migrate comes in. It is a suite of tools designed to make migration from different sources easier. For Drupal 7 migration, “Acquia Migrate: Accelerate” (available in Q1 2021) provides an interface to manage mappings and run migrations through a convenient UI while the site is being built. For other sources, Acquia Migrate integrates with Xillio to read from a variety of Enterprise Content Management sources thereby saving huge chunks of time otherwise spent in defining and testing the mappings.

Of course, there were a lot of other technologies introduced and discussed at Acquia Engage. I discussed the ones above in detail but there were many more that caught my attention. I’m interested to see how Acquia CMS turns out, especially its licensing model, and integrations with Site Studio and Lift (now Personalization). On the marketing side of things, there is the CDP which is tightly integrated with various machine learning models that allow for things like “predictive sending”. What caught your eye? Let us know in the comments.