We’re having a series of conversations with our team members about diversity and inclusion. In this first part of the series, we’re talking to Hussain Abbas, Drupal Service Area Lead, and Akanksha Singh, Backend Developer.

Why is the subject of diversity and inclusion important to us?

AKANKSHA: Everybody should have equal rights, irrespective of where they come from.

I’ve seen instances in my previous organization where women managers have had to struggle a lot to advance in their careers because others were dismissive of them. Everyone deserves to be taken seriously—and that’s why I became involved in this.

From an organization’s perspective, diversity brings in different perspectives, ways of thinking. It makes you better, letting you create better products that cover all user bases.

I was recently reading about how biases come into machine learning algorithms when I saw this tweet about a person who had to make several attempts to have their photo accepted by the US passport website:

Today, I simply wanted to renew my passport online. After numerous attempts and changing my clothes several times, this example illustrates why I regularly present on Artificial Intelligence/Machine Learning bias, equality, diversity and inclusion. #passport pic.twitter.com/sEsmdTcR1L

Whatever you’re doing as an organization, especially if it involves technology, if you bring in more diversity, you build products that cater to everyone. If this website, for instance, had been tested with real data, this problem would not have come up. More people means more opinions. If you only have a certain demographic of people on board, everything will be geared towards them.

HUSSAIN: I just think it’s the right thing to worry about, personally. It just feels to me that this [discrimination] is something that shouldn’t be happening.

Apart from the altruistic goal, diversity is simply better for the company. It helps companies create better products which serve a diverse need which helps society at large.

The example above is true for all kinds of situations, even outside of machine learning. Machine learning biases happen because they study data. Data is biased because of history. Biases happen there, and they also happen in decisions you take in your everyday work.

This is why peer reviews are important—not because we think developers are not effective enough. If that was the case, senior developers would never need to have their code reviewed. But that’s not what we practice. Everybody gets their code reviewed. That is because the act of having someone else come in and review the code is important. That’s the simplest example I can give of diversity in play. You could be very highly experienced, but someone with a fresh perspective can help uncover problems that you’d never have thought of. I see this every day.

Having more types of people involved at every stage of building a product or working on a project improves the output overall.

One of the principles of agile is that everyone is required to attend standup meetings: QA engineers, frontend and backend engineers, etc. Diversity helps in making better decisions, even on a day to day scale. We can extend this to all ideas that apply to an organization.

Axelerant is a distributed organization. That gives us the benefit of geographic diversity even at this size. This lets us gain perspectives that help us be leaders. It’s not a stretch to say that Axelerant is one of the best companies in India for Drupal or PHP in general. We are engineering heavy. That’s not an accident. That happened because it didn’t matter where people work from, and that’s geographic diversity in play.

What have we done to promote diversity and inclusion at Axelerant, and what results we have seen since?

HUSSAIN: I feel we’re doing quite well in terms of diversity. Our geographic diversity is great, considering India itself is home to many diverse cultures. We also have team members from outside India, so that lends other perspectives too.

We could do better in terms of gender diversity—we’re now approaching the industry average for gender ratio (28 women out of a team of 86, or 33 percent). In terms of diversity in age, as far as a typical IT company goes, I don’t think we are that bad at it. It is common for an IT services company to be primarily comprised of 30-40 year olds. We’re not that far from the general ecosystem.

We have diversity in language, but I see language as more of an inclusion problem rather than a diversity problem. Again, since most of our team is based in India and English is the unifying language anyway, that kind of works out.

We have faced some inclusion challenges with language. Since we are predominantly a Hindi speaking team, some people tend to switch to Hindi during calls, and people who can’t speak Hindi feel left out. And since they’re in the minority, they don’t always feel comfortable speaking up about it. But we’ve raised and addressed this openly. 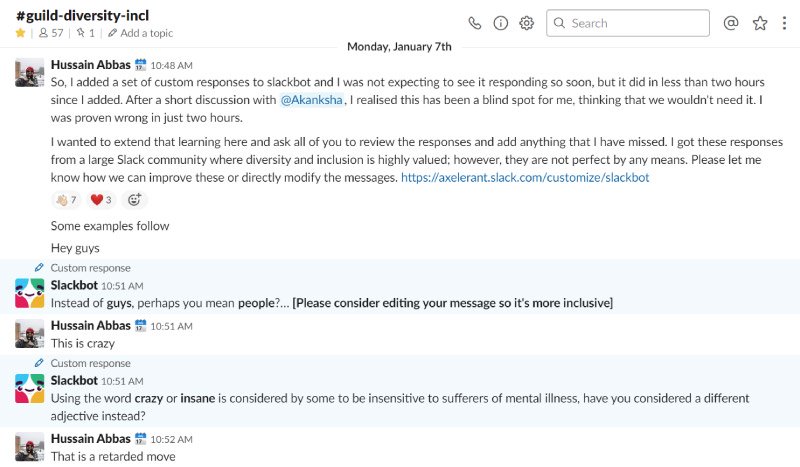 These custom Slack responses encourage us to use more inclusive language.

This decision was based on some of the things I read about how women feel when they are addressed as “guys” in a group. It happens so commonly that many women don’t even think about it. Many people also said that it didn’t really apply to them. But some people feel actively excluded. So I felt it should be there.

AKANKSHA: We’ve noticed since that our team members use one of these terms, see the Slackbot’s response, and then they go back and edit their message to eliminate the term. Since it is habit forming, maybe eventually some of them will gradually shift towards more inclusive language.

For diversity, I think we are focusing on hiring more women candidates.

And in terms of inclusion, we’ve established pay parity. That was a huge issue. It’s a great thing that now everything is transparent, and people know exactly where they stand. There’s no discrimination based on who you are or where you’re from.

Would you agree that Axelerant does a lot to make sure everyone’s voice is being heard (anonymous surveys, acknowledging feedback, having hard conversations openly)?

AKANKSHA: Yeah. I would agree with that. Axelerant is doing a lot of things to make sure everyone has a voice.

Weekly surveys run via Officevibe help us check in regularly with each team member.

HUSSAIN: I think so, yes. I’d add that being conscious of bias is very important, even in the little things. Because if you don’t consciously plan on eliminating bias, you may end up doing things just because they feel right. And the keyword here is that they feel right… to you. If we always do what feels right to us, we may find ourselves in certain scenarios acting in ways that might feel right but are actually unfair. We should have discussions that help us identify that we are choosing to do something because it is better from a certain point of view. Because otherwise we may continue to repeat things that feel right and miss the bigger picture.

Feedback received from surveys is responded to openly in Slack.

What else would you like to see happen at Axelerant?

AKANKSHA: There are certain challenges we’ve faced, like team members sometimes using languages that others in the team may be unfamiliar with—having some guidelines around that would be good.

We've openly discussed and written about our challenges with language here.

There’s also a need to educate people so they understand where the challenges are before they’re able to actually do anything about it.

I’ve also heard often that the best way to have inclusion is to have diverse people at the leadership level. Because they’re the ones who make the decisions. So I feel maybe that needs to improve.

Also, usually opportunities are given to the same group of people over and over again. Maybe we could do something around hiring more diverse people and then providing skills training. That could help.

HUSSAIN: It’s true that that is how these problems keep repeating generation after generation.

Being a distributed company, we have found it very difficult to do anything in terms of foundational skill development. Somebody who has basic skills can improve their skills here. But we have not had success with building foundational skills.

This is why we came up with the Axelerant academy program. One of the places where we’ve really struggled with diversity is across skills. Most of our team is comprised of relatively experienced engineers. There is virtually no one who is fresh out of college. That’s the kind of diversity we could improve, and the Jaipur and Srinagar programs we’re running are actually designed to solve just that, so that we can hire fresh graduates and help them build skills right from the beginning.

Some might argue that diversity for diversity’s sake can have a negative impact. What would be your response to that?

HUSSAIN: We all have this tribe mentality, you know. We are drawn to people who look or behave like us, in all our actions. And it’s very easy for those biases to creep up on anybody.

This is a result of system one thinking.

Nobody can honestly claim that they never let biases affect their actions. Even in system two thinking, we may be influenced by system one thinking and believe we're not discriminating, but we actually are.

Say there was a male and a female candidate for a position, and the person who gets to make the hiring decision is a man. Both candidates are equally qualified. What would be the basis of the decision making? If there's only one person deciding, it would be reasonable to assume that their decision could be biased. (Of course, everybody has a different way of handling this, and a lot of factors would go into the decision.) But if there was a diverse leadership that made this decision, it would be easier to be certain that the decision was not made just because of familiarity.

Sometimes even thinking about it helps. But just knowing that you might be biased doesn't eliminate bias.

AKANKSHA: I think that the entire purpose of diversity is to be fair. To give another example, suppose there's a team of 10 developers, and all of them are men, and you're hiring for one new position. And there are two people you’re interviewing for the job, and maybe the man is slightly more qualified than the woman. If you consciously make the choice to hire the woman just because you wanted the team to be diverse, that does not necessarily mean that you are not hiring the best person for the job.

In the long run, you might come to realize that a different perspective has improved what you're working on, and just contributed in different ways than you're used to seeing.

Some might also say that diversity programs are a scam that organizations use to promote themselves. What’s your response to that?

AKANKSHA: In my opinion, to be able to come to the conclusion that it's a scam, that conclusion needs to be made from a position of privilege. As long as you don't put yourself in the other person's shoes and consider their point of view, as long as that empathy is absent, anyone can say it's a scam, right?

HUSSAIN: And to support this, here’s another example of a product where clearly the team building it was non-diverse.

If you have ever had a problem grasping the importance of diversity in tech and its impact on society, watch this video pic.twitter.com/ZJ1Je1C4NW 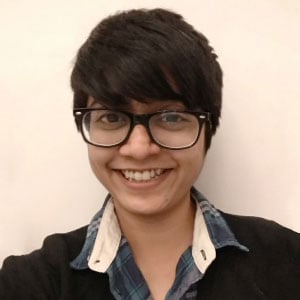 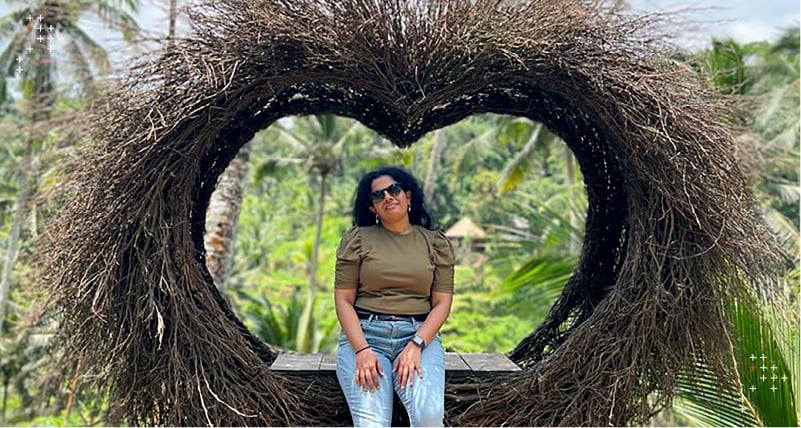