The primary expectation of a new college CIO or university IT leader is that of any fresh higher ed administrator. And that should be to change things for the better with IT greatness. And for many believers, there's no software initiative greater or more impactful than the Open Source to higher ed movement. 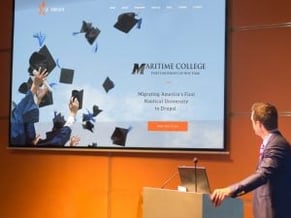 There are many school CIO's and academic IT leaders who have evolved and opened up higher education by bringing Open Source projects to campus—at times subtly, sometimes hyperactively. This forwards the general mission of every university: to disseminate and expand knowledge and information across communities. Adopting Open Source software allows universities to put more into this mission.

Here you'll find a growing list of university CIO's and information services directors who have supported this mission with their promotion or use of Open Source. (Leave a comment below with the names of college CIO's or IT leaders you think we should look into.)

Ann brings a history of Open Source innovation to this storied Ivy League university. In the 1990's she was a founding Executive member of MIT OpenCourseWares, an initiative that published online teaching materials and curricula that anyone could access and use freely. She is also a founding chairperson of OCWConsortium, which unites universities around the world to share educational materials.

Santhana and Indiana State University teamed with Modo Labs, a mobile solutions and support services company, to launch an app based on the Kurogo Open Source mobile platform. In doing so, they bucked a trend in higher education that rejected Open Source platforms as not being ready for larger applications. Programming and support from companies like Modo have made it easier for universities to justify their use of Open Source systems.

Clay sees a growing pool of developers and contract consultants who are supporting Open Source programming. That growth has addressed a problem from the early days of Open Source programming in which Open Source adopters either had to rely on their own internal expertise or devote a big chunk of their budgets to hire the few contract specialists who could help them. The growth in third-party expertise has allowed Georgia tech to hire management specialists while farming out programming work to technologist contractors.

Jim takes a more measured approach to Clemson's use of Open Source technology, noting that many commercial legacy systems, such as payroll and human resources, continue to serve the University's purposes. No university or other organization should adopt new technology, nor sign on to the latest trend, solely because they are new. Clemson is taking a reasoned and rational approach to bringing Open Source to higher ed.

Boston College has joined the Kuali Foundation, which also counts MIT, Lehigh University, Cornell, and Colorado State University among its members. Kuali provides Open Source programming for higher education institutions. Michael notes that the Kuali Foundation encourages its members to share ideas on how Open Source applications can be developed to improve university IT services. This keeps a university from struggling with Open Source programming on its own and from developing with a "lone wolf" mentality.

Under Brad's leadership, Indiana University co-founded the Kuali Foundation and the Sakai Project for software teaching and education. Wheeler also led IU to join the Open Source Initiative ("OSI") as an affiliate member. The OSI is an advocate for using Open Source software to improve efficiency in higher education.

John manages a robust information technology system at Rensselaer Polytechnic Institute (RPI) in Troy, New York. As a premier technology-focused educational institution, RPI and its IT department encourage the development of new technology and new approaches to that technology. This focus led to the formation of the student-led Rensselaer Center for Open Source Software, which provides an outlet for students to use Open Source software (OSS) platforms for application development.

Under Bruce, the Madison campus of the University of Wisconsin has undertaken multiple information systems initiatives to keep the school at the forefront of technology development. Together with Steve Cramer, the university's Vice Provost for Teaching and Learning, Bruce led the university's participation in Unizin, a consortium of universities that seeks to develop the next generation of teaching and learning environment tools.

Sean has been at the helm of Northwestern's information technology operations since 2011. In 2014, the school streamlined its research purchasing operations with an Open Source system. Other initiatives at Northwestern's College of Medicine have launched tools on Open Source platforms, and the school continues to explore custom solutions for its IT needs that it can develop with OS applications.

Futhey has presided over Duke's information technology operations since 2002. The school is working on a new platform to replace its library's existing Digital Collections platform and is using an Open Source "Blacklight" interface to complete the Collection's discovery and access layers.

James assumed the CIO role at Princeton in 2012. Like its Ivy League cousins, Harvard and Yale, Princeton uses the Drupal Open Source content management system. The school will likely expand its use of Open Source platforms under James.

Gerry manages data and information technology resources at Purdue's four separate campuses in Indiana. The University expanded its reliance on Open Source software in 2015 with its implementation of "Learning Online Network with Computer-Assisted Personalized Approach," or, as it is more commonly known: LON-CAPA. The university estimates that it is saving its students more than $1 million via its use of an Open Source product.

We congratulate these college CIO's and their staff for their efforts in administering complex information technology systems that need to appeal to a diverse user group while bringing Open Source to higher ed. If there have been updates or you think there's an IT leader in higher ed that we missed, submit a comment below and we'll update the list.