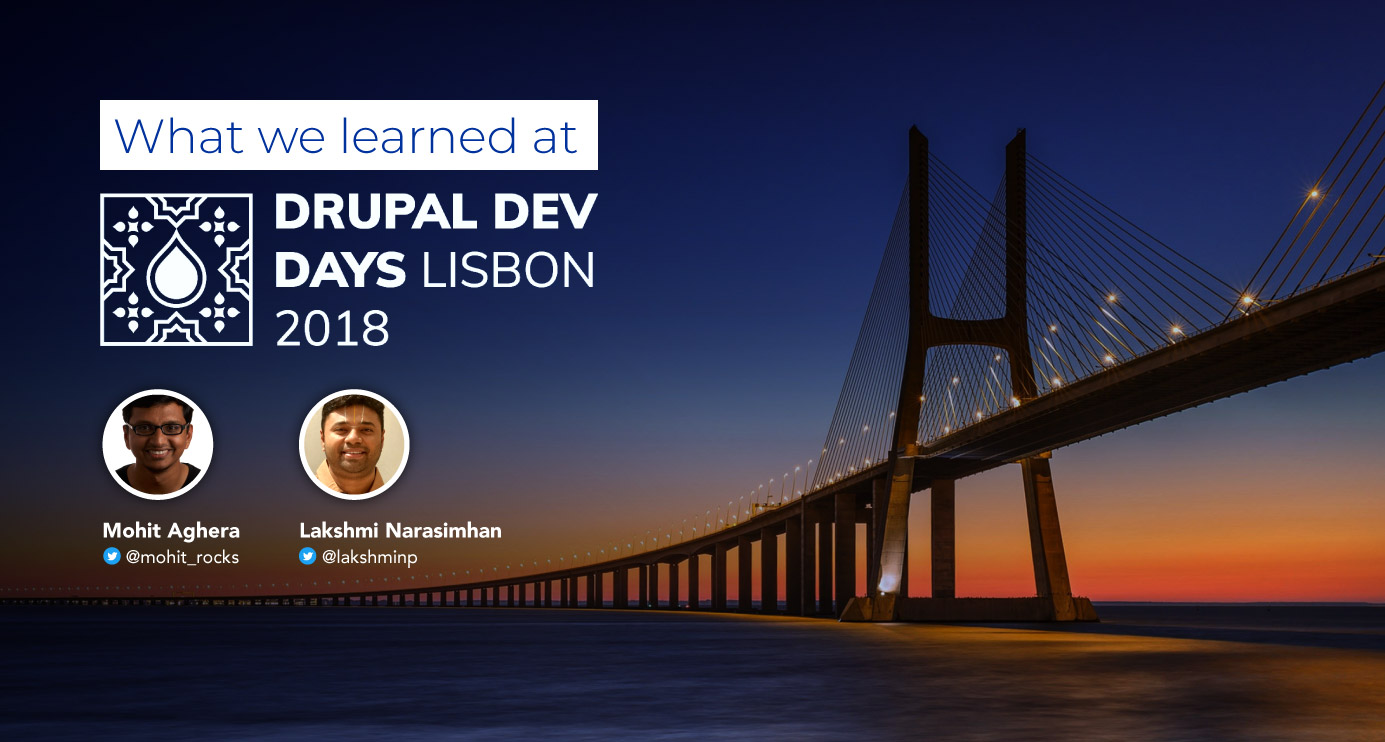 Drupal Developer Days Lisbon was valuable, nicely organized, and full of energy. Two Axelerant team members attended to contribute a workshop and a session on two key topics, and they wanted to share key highlights with you, to thank the volunteers, and to encourage more developers from around the world to make it in 2019.

So, how was it overall?

Incredible. Of course the event was highly developer focused—which is why developers from all over should make time to really commune. European agencies and the talent behind them are real powerhouses. The environment was great.

Well, I’m always looking for conversations around DevOps solutions, and it seems like everyone and their dog has a workflow problem. They’re looking for and want to have some rudimentary CD pipeline which helps them quickly deliver. It seems that Lando adoption is obviously growing and Vagrant/VM is thinning down. I was personally happy to see a houseful K8s workshop. I initially thought that not so many people would be aware of it, but was I was proven wrong!

How were the keynotes?

The keynote by Gabor Hojtsy was excellent. One thing I realized was that there are so many initiatives in Drupal. It’s really spread its wings and grown from being a small “LAMP” flavored CMS to painting with broad strokes—API first, workflow, layouts, etc.

In all honesty, the flipside, in my opinion, is that the developer audience is not clearly defined. Is Drupal a clicky, site-builder friendly tool (with layouts, out of the box initiatives, etc) or a content management framework (composer in core initiative, config YML files)? It’s hard to ride two horses at the same time.

Here are some of the initiatives I really like. For one, the Out of the Box Experience initiative (the Umami demo), for showing off Drupal’s superpowers to prospective people making CMS decisions in an organization. Also, Admin UI JS modernization? The name says it all—awesome. Some others: composer as a first class citizen, the telemetry initiative, and using GitLab as the issue tracker for Drupal.org.

And who manages all the initiatives and makes sure they don’t step on each other? Hojtsy. Really great work.

What other sessions or talks do you remember well?

What‘s new in Drupal Commerce. I personally think Drupal Commerce is technically feasible for a large organization, as Drupal can fit the bill in terms of other aspects too, like workflow, content strategy, personalization, etc. But like any other solution, engineering finesse alone doesn’t dictate product decisions. There was a lot of emphasis on having shared marketing resources, artifacts across agencies for Drupal Commerce—like how Drupal is competing with other platforms with similar offerings.

TDD using Drupal. The session demonstrated how TDD and Drupal is possible and I’m surprised that we don’t see tests in contrib and custom modules as much as we see in core. Another good takeaway was “tests as documentation”, the idea being that you figure out how to use a module by reading the test code.

Modular software, modular infrastructure. This was an aux armes! for all DevOps folks to create shared “best practices” Docker images for Drupal. Quite an intuitive talk.

One flew over the developer’s nest. I’m usually curious about sessions alluding to movies, and this one didn’t disappoint at all. It covered the importance of people and process in an organization, and is a must watch for anyone aspiring to be a CTO or Engineering Manager. You’ll come out with a gigantic reading list from the session, including but not limited to The Phoenix Project and Modern CTO and more. I also really liked how the session flowed like a personal anecdote—nice.

There really wasn’t too much marketing or sales that I could see on the ground—because developers are a hard sell—though it would be a great idea to sell developer-focused tools at the event, like IDEs and certain DevOps offerings.

There was certainly a lot of buzz abound Drupal Europe—inviting Matt Mullenweg, and everything people like Baddy and Gábor are coordinating. It seems like it’s going to be really special.

Overall, the experience was like drinking through a firehose. We had a lot of sessions to watch and had to juggle that with Lisbon sightseeing. I’m looking forward to watching the ones I missed once they’re uploaded to YouTube.

Here’s a shout out to the organizers, with a special mention for the lunch catering; this was one of the first Drupal events where I had more choices, being a vegetarian. Thank you!

What did you think?

Contributions was a main focus—people sprinting in the sprint room for the whole week! There’s also tons of excitement around Drupal Europe.

Gábor Hojtsy really did a nice job with his summary of all the initiatives in Drupal 8. He also covered the status of 8.6.x, and how the process is coming along.

I’m quite impressed with these—CMI 2.0, composer initiative, Out of the Box initiative, and the significant amount of work done on the JSON API module to move it into Drupal 8 core in an experimental state.

As a community, we have made significant progress on media initiatives as well, and they’re in good shape right now. Gabor also mentioned the security release initiative and how we are dealing with it.

Rachel's keynote was inspiring. It covered how Drupal is making a real impact on lives, how Drupal is changing the world. She covered some good use cases of Drupal, like how Warchild UK is using Drupal to help childrens in war affected areas. She explained how Drupal helped to double the conversion rate of donors—which in turn helped Warchild UK to receive more donations for more impact. She also urged everyone to donate, volunteer, and contribute to the Drupal Association.

So which sessions did you attend?

Lakshmi’s for one! The Helmsman and the water drop: Running Drupal on Kubernetes.

This workshop by Lakshmi was really useful for developers who want to use Docker in their development and production environment. He covered Kubernetes and Minikube nicely, and related concepts that help get things up and running using Kubernetes and Docker.

You were an active contributor. How did it go?

I was actively working with the Out of the Box initiative team to use CSV import for sample content. Thanks much to Elliot Ward for providing so much help and setting clear expectations from a ticket perspective. I spent around three days working with the team and we are currently working on this issue. (Everyone is welcome to contribute.)

The enthusiasm for contribution was clearly visible—and contagious—in the contribution room. Everyone were really helpful in contributions and other things.

A HUGE thank you to everyone that's helping out on the Out of the Box @d8initiatives (the Umami demo) at @drupaldevdays!

In fact, a huge thank you to everyone who's getting involved in making Drupal better :) https://t.co/nJyCPXAicY

This event was planned very well. Thank you to the awesome team who worked hard at Drupal Portugal—and to all the volunteers, speakers, contributors, sponsors, and attendees. 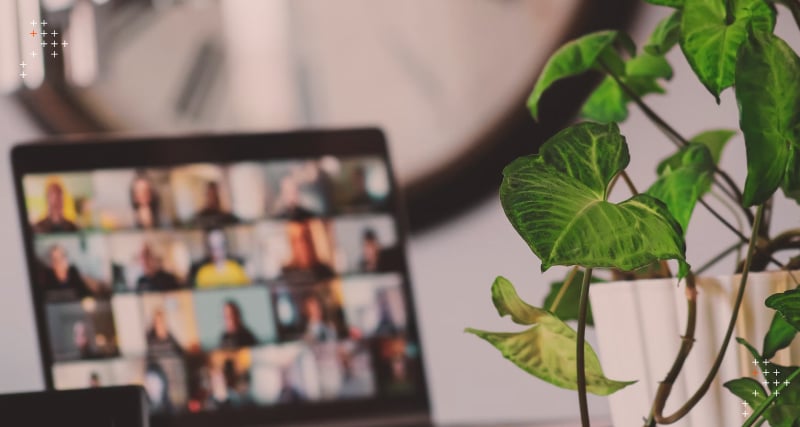 DrupalCampNYC: My First Experience As An Event Host 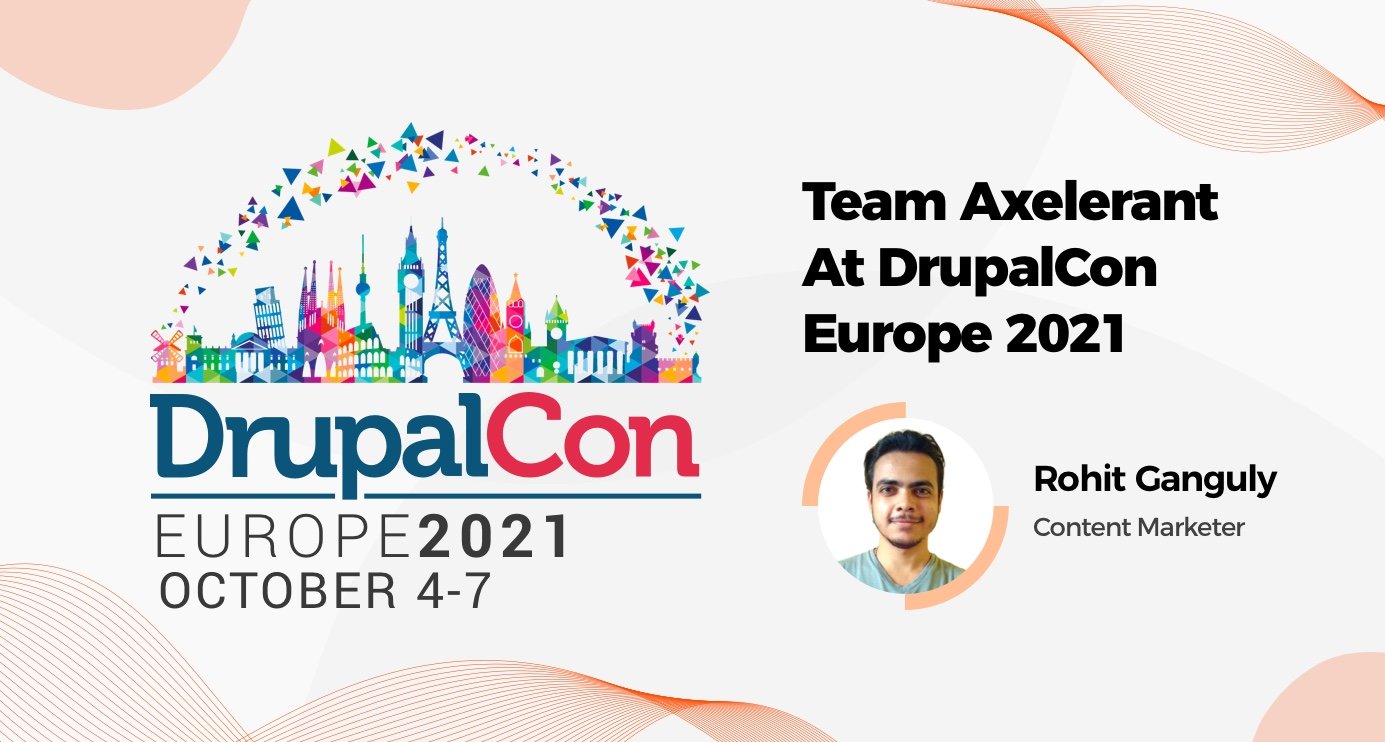 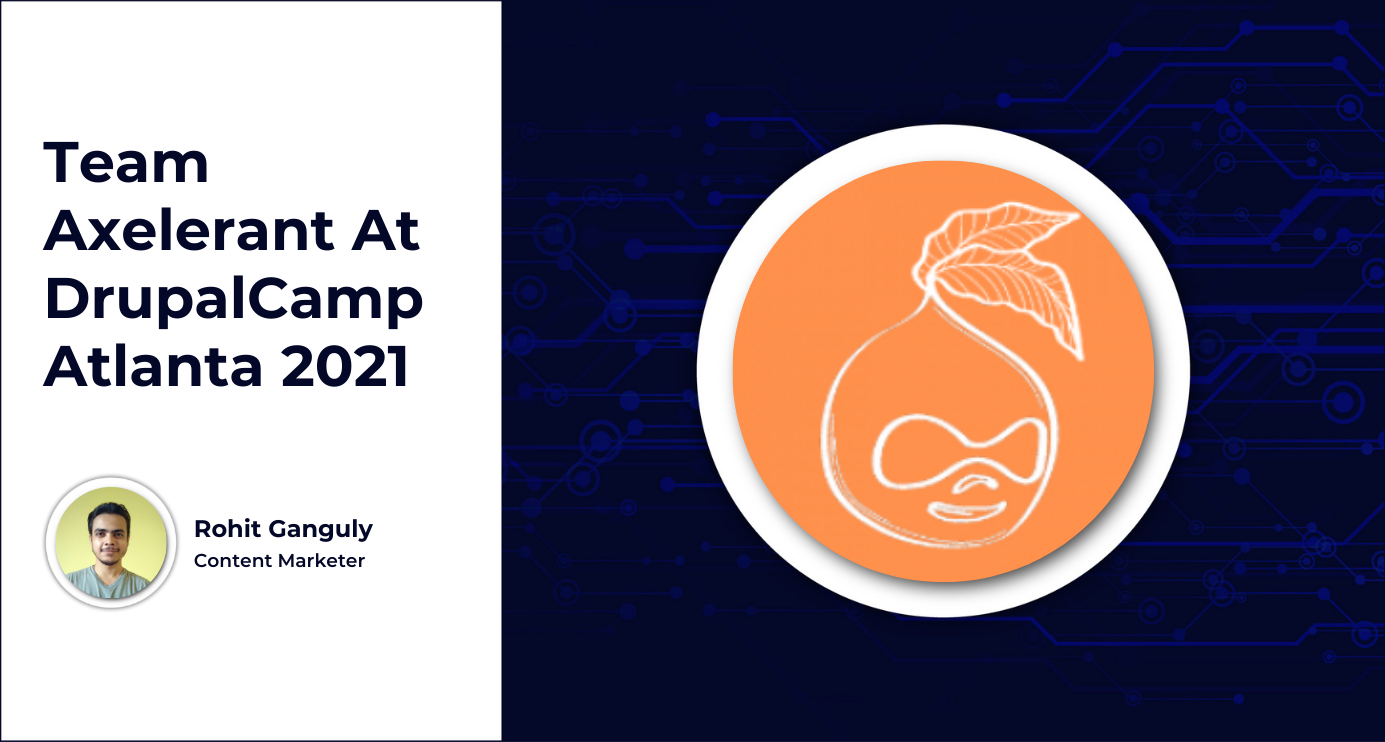