How We Forged The FFW Partnership On Quality 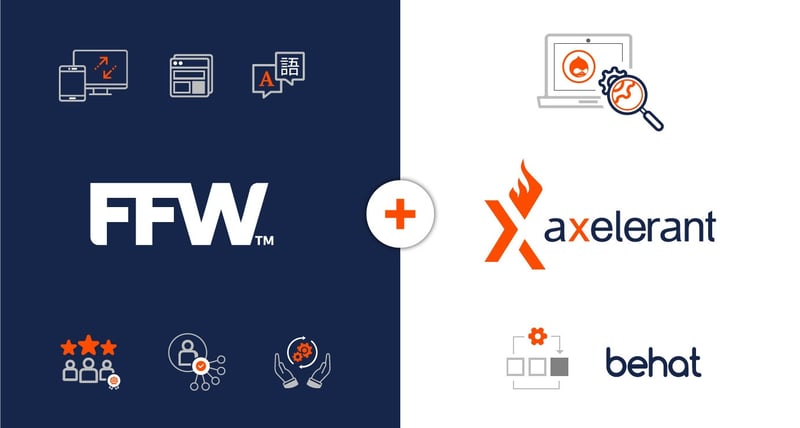 FFW is a part of Intellecta, a communications group listed on the NASDAQ OMX Stockholm and comprised of 10 leading consulting and agency brands. This agency creates digital experience platforms for clients such as the City of Copenhagen, YMCA of the Greater Twin Cities, GE Energy Management, Lush, and many others.

Their reputation FFW is actively involved in the Drupal community, recently showcasing their proactive thought leadership with a customer experience platform for the YMCA of the Greater Twin Cities this year. Because of our own involvement in the Drupal community, it was a natural for us to get to know each other and discuss portfolios and activities. One thing became clear very early on: both Axelerant and FFW teams recognized in the other a shared emphasis on quality work and quality support for Drupal.

The basis of our partnership with FFW is filling talent gaps. Because of bandwidth challenges, the agency requires adept talent resources to take on certain projects; it’s either turn to the right staffing services or pass opportunities by. Initially these engagements began in 2015, when Axelerant was asked us to pitch a team of Front-end and Backend Drupal Developers as well as an Axelerant Project Manager. We’ve continued our staffing engagements ever since.

For a leading radio website built on Drupal 7, Axelerant’s team was called in, this time to work on creating a user generated contests feature. With this, users could create their own polls, make them live, and to boost them to certain audiences. The team created a customized polling user interface that took care of specific voting rules, restricted access to specific audiences.

They also created a flexible backend that enabled the admin to handle what kinds of details to expose and implemented widgets and customizations to improve the user experience on the site with different media types (SoundCloud files, YouTube videos, photos and more).

Most of the obstacles we encountered were typical issues and were easily solved. Some unique aspects had to be tackled, but overall the entire team worked in a focused, self-organized way to ensure smooth project delivery.

In one of the projects, the client have a brief for a feature to be built, and when it was developed, they realized that it was not what they needed.

So the feature was built again with new requirements, which met with the same result. Axelerant did the development again per new stories, and still managed to have the feature out in the planned time. Our agile approach helped in quickly adapting to these changes and give the client the product they would truly be satisfied with.

Since Axelerant religiously conducts retrospectives, the entire team was able to identify areas for improvements. Axelerant changed the ticket workflow for a better fit, FFW fixed some technical environment issues at their end which was creating unnecessary delays. Axelerant also improved its grooming and expectation setting skills so as to ensure everyone was on the same page with the requirements and to avoid surprises.

Dependable People, Excellence Where It Matters Most

During the course of agency-to-agency involvement, strengths (and weaknesses) become clear. And in the case of FFW, this value was repeatedly demonstrated to be our people, their high-caliber performance, and the benefits wrought via the staffing engagement as a whole.

New Opportunities On The Horizon

With this demonstrated success of these staffing projects, Axelerant’s QA-based services currently characterize the Axelerant relationship. And through leveraging our knowledge base and partnership learnings, an evolved Axelerant QaaS (Quality as a Service) offering for agencies like FFW is beginning to take shape.