We have seen many examples of lazy loading components in Angular using route based loading. In this blog, we would be looking at a use case that involves data sources like a CMS, which provides data where we don’t know what components to load and in what order. To address this issue, we would be loading components dynamically based on the API response at the run time. Instead of loading all the components in the initial load, we only load components based on the data we receive from the API. This way, we lower the size of the initial bundle, fetched when the web site is loaded, which in turn reduces Time to Interaction. This leads to faster page load, and we also save users bandwidth, which in certain parts of the world means saving them money.

In this blog post, we will be following these steps to set up lazy loading of components:

1. Setting Up Routing To Use A Master Component

The application is architected in such a way that all the routes are directed to a common Master component. We will start by creating a master component which would act as a container for all the components that would be loaded and rendered dynamically. Right now, we will just create the component so that it can be referenced in the routes.

We will further configure the Master component in Step 3.  An error component can also be added similarly for redirecting to error pages. It can be as simple as this:

This would be the part of the initial bundle which is loaded when we open the web site. The routing is set up as below in the app-routing.module.ts:

We have added following routes which all load the same master component:

The data we are expecting from API contains all the data for components that are to be rendered on the current page. A different URL will have a different set of components and related data for that page. The data in JSON format looks like this:

The API consists of a components array. This array contains objects which have two main properties:

2. Adding Reusable Components And Corresponding Modules For These Components

We can add as many reusable components we want whose loading and rendering will be controlled based on the data we receive from the API. We also add a module that bundles the relevant components inside it. This is done as Angular only supports lazily loading modules and not the component itself. In the module, a static property: rootComponent is declared to hold the reference of the component to be rendered. This is done because it is the only way our service would be able to access and determine what kind of component to create. Here's a paragraph component has created as an example:

3. Creating A Service Which Will Help Us In Loading Components Lazily

We will create a  service that will load the component code lazily as per the data received from the API.

The code is explained below:

Also, add the lazy-loaded component module path to the lazyModules array in angular.json

4. Configuring The Master Component To Use This Service To Render Components

With everything set up, we can check the bundles loading in the Dev tools under the networks tab (Use JS filter to view more clearly). While visiting a new page, if a new component is encountered, the corresponding module containing the component is loaded at runtime.

Feel free to download the source code from: https://github.com/sagarrchauhan/angular-lazy-loading-components 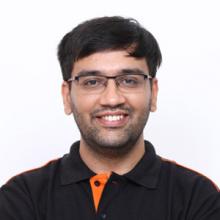