The JAMstack architecture was introduced around five years ago and over the last two years, it has picked up a lot of steam. We at Axelerant are equally enthusiastic about it. Throughout this year, we have been experimenting with JAMstack by building a variety of products that have helped address various obstacles and deliver a pleasing experience.

The "A" in the JAMstack stands for APIs and is a crucial part of the architecture if you plan to move away from tightly coupled systems. These APIs are built using Lambda functions that are easier to maintain and cheaper to run than virtual machines. However, it isn't always possible to architect complex Event-Driven systems with just a bunch of Lambda functions; even though the prominent JAMstack cloud providers have significantly improved the developer experience, there are still a lot of missing pieces required to build such systems. 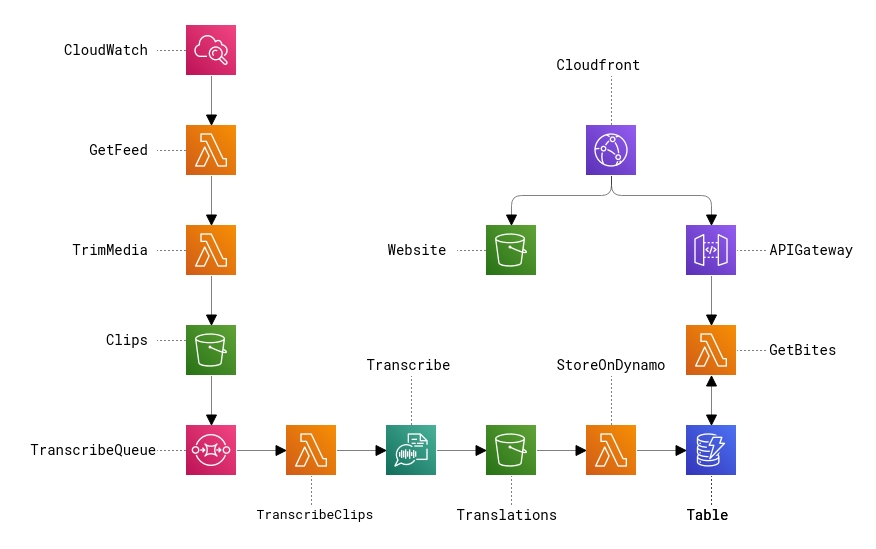 In this blog, we will be discussing how we leveraged AWS Serverless services to go from an idea to implementation by using deep learning and event-driven architecture.

Given the stay-at-home situation due to COVID-19, the number of podcasts I listen to has grown significantly. Amongst them, Soft Skills Engineering is my favorite. Besides the plethora of insight they share, I really like the funny opening they do in most of their episodes.

In that vein, I choose to combine my interest in JAMstack and serverless with my love for podcasts to build an application that would help me explore and understand the serverless ecosystem better.

The application uses the RSS feed for the podcast and converts the funny bit in the introduction to the text. On the surface, the application might seem trivial; however, the internals is a lot more involved as it uses a bunch of serverless services and a bit of deep learning magic.

As you can see, it takes us several steps to go from a single podcast RSS feed file to a list of specific funny sentences. Let's start exploring how each service plays a role in this system.

A Lambda triggering multiple instances of another Lambda

SQS controlling the back pressure and gradually triggering Lambda

To build the list of all the bites, I pulled the data from the DynamoDB table and rendered it on an HTML page. However, I didn't shy away from over-engineering this part of the system, even though most of the pieces are warranted.

Learn How We Built A Powerful Tool To Facilitate Our Team’s Retrospectives for teams to visualize data better and limit its access to relevant members.

While building this application, I ended up provisioning a lot of services and reconfiguring them frequently as I figured my way around. This would have been a tiresome process had I chosen to go the AWS console route; instead, I used CDK with TypeScript. I have previously used the Serverless framework and written some Cloudformation templates, but it was always difficult to remember the various conventions and available plugins. I even considered going the Terraform route but learning it seemed like a hurdle to make quick progress. On the other hand, CDK is intuitive as it's just code and thanks to TypeScript, it made passing values like ARN and figuring out various configuration options a breeze.

Unlike the Serverless framework or Terraform, CDK is an Amazon-specific solution. However, if you plan to stick to AWS, you shouldn't look beyond unless CDK doesn't support the service you want to use. Regardless of what tool you use to provide the infrastructure, you can still run into problems if you don't have ample experience and understanding of architecting systems.

Some of the AWS community members maintain CDK Patterns, which has been an essential source of my learnings and an eye-opener in terms of what is possible with CDK and AWS services.

As the title says, this is an over-engineered system and could be made a lot more simpler. However, it still checks many boxes, especially the ones related to lower cost, scalability, and faster delivery. I was able to build an Event-Driven system that includes deep learning in a matter of few hours and so far, I haven't been charged more than $1 even after testing it several times.

All the code for this project can be found on GitHub and you can access the site here.

Check out a news aggregator we built it for internet users in Kashmir that is fast to load, works offline, and notifies the user about the latest updates. 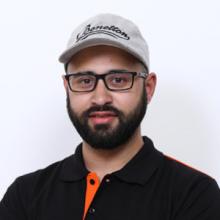 Away from work, he likes cooking with his wife, reading comic strips, or playing around with programming languages for fun.